This week I continued to rest in the coolness on that rock in the river of change– trying to escape the brutal heat and humidity of late July. I continued to allow myself to just follow my energy and give my mind and body the needed time and space to heal.

To combat the heat, I found myself thinking of summer trips in the past to cooler climates. I pulled out my journals and pictures from my solo journeys.

Maybe it’s a COVID-19 Staycation— sitting in the cool of my living room and taking a virtual trip through my photos and journals, safely escaping without risk of disease.

The place that kept coming to mind was Vermont. I traveled there on my solo journey in July of 2015. I wanted to go by Amtrak– something I’d never done. I made my plan to leave Durham on Friday morning and travel as far as New York City. There, I stopped off and visited my younger son who lived in Manhattan.

Looking back, I’m glad I followed my instincts to go to that Northern destination and spend that time with Ross. We walked for blocks-and-blocks exploring the architecture and Central Park. We managed to avoid being hit by cyclists walking over the Brooklyn Bridge and had lunch at the riverfront park watching the water taxis. The most special part of that weekend was making Sunday supper together, cooking in his kitchen some of his favorite Southern dishes: country style steak, potatoes, green beans. How it touched his Mama’s heart when he said Sundays were “family days.”

After three nights with him, I returned to the train on Monday morning and headed to White River Junction (WRJ), New Hampshire. I stayed in the historic train hotel– Hotel Coolidge, that had rooms designated for Hostelling International. I’d spent nights in their hostel rooms in different parts of the U.S. and found them safe and well-managed. I loved the ornate banisters and wide stairway, the cozy lobby furnishings that were so unique compared to a Hampton Inn or some other economy lodging.

After a couple of days of exploring everything within walking distance of the Hotel Coolidge, I rented a car to see what I’d come for: Vermont. It was easy driving over the Scenic Byways. I made several stops, eating lunch in the postcard town of Woodstock, touring the cheese factory and homestead of Calvin Coolidge, visiting an art and craft store in an old mill, and then driving west to Button Bay State Park on Lake Champlain. My cabin was on a grassy bluff that overlooked the lake. I couldn’t wait to sit and drink in the view that I’d been anticipating for months.

That scene has stayed with me, the calm water and beauty of the distant Adirondack mountains. I sat there and felt the satisfaction of arriving to the place I’d envisioned, the place that had called my name.

For one night, I stayed in a cabin. I’d brought food so I wouldn’t need to cook since I had no way of bringing supplies on the Amtrak.

When I’d made my reservations, the staff member said the cabin was only available for one of the three nights I’d planned. The only option for the next two nights was a Lean-To. I’d never stayed in a Lean-To but in order to be on the lake, I reserved it and said to myself, “You’ll figure it out.”

When I was sitting on the porch of the cabin, a family was at the next site and they spoke to me, asking me where I was from and how long I’d be staying. They came to Button Bay every year from their home in Massachusetts. When I told them I had to switch to a Lean-To, the man looked at me with concern and asked, “You got a tent?”

I hesitated, then answered, “No, I have a bedroll and bug spray. A woman I know from here said I should be fine.” I’d met her weeks before my trip and she was from the area–so I assumed she knew.

“Those bugs will eat you up,” he said, and then described how bad the mosquitoes were at night. “I got a tent you can use.”

I appreciated this kind stranger, looking out for my welfare.

The next morning when I was leaving, he pulled out his orange pup tent.

“I first used this when I came as a boy,” he said and handed it to me.

That evening, I rigged the tent to the side of the Lean-To using rocks from the next site to keep the poles fairly upright. Once I got in that night, I was careful not to move and pull the whole thing down. I read my novel using my small flashlight until I was so tired I had to sleep– no matter the hard floor. 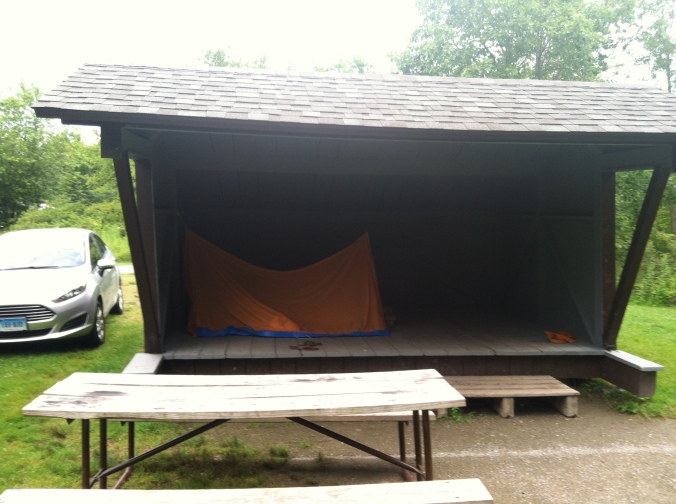 The next morning when I went to the bathhouse for a shower, there were hundreds of dead mosquitoes on the counter. The man’s words, “Those bugs will eat you up” buzzed in my ears and I was so grateful for that little orange pup tent.

That day and the next, I walked about the shoreline drinking in the light on the water.

Late in the mornings I drove to the nearby town of Vergennes. It was the place I could get a great cup of coffee and use the WiFi at the library across from the coffee shop. Driving around the town I discovered an area that looked like I’d landed in a painting.

Otter Creek with Vergennes Falls in the distance

I parked my car beneath the trees of a city park and fishing area. How peaceful it was in the quiet stillness underneath the shade.

I think I’ll just stay here and rest a little longer on this virtual journey, collecting myself before moving to the final passage of the Gap, onto the bank of the other side– the place of New Beginnings.

Peace and Blessings to you as you find your place of rest and refreshment.

For More Pictures and Description of Vermont Trip go to my