I left the hospital that Monday night excited that my friend Delores would be coming to stay with me rather than at the hospital hotel. Her husband, Johnny had been admitted to the UNC Cancer Hospital on December 2cnd to treat complications from melanoma. I could see Delores was exhausted from spending her days at the hospital followed by the long drives home down those dark country roads; better to drive the six miles to my house. After my visit she called to say she’d stay with me the following Friday night– December 20th. 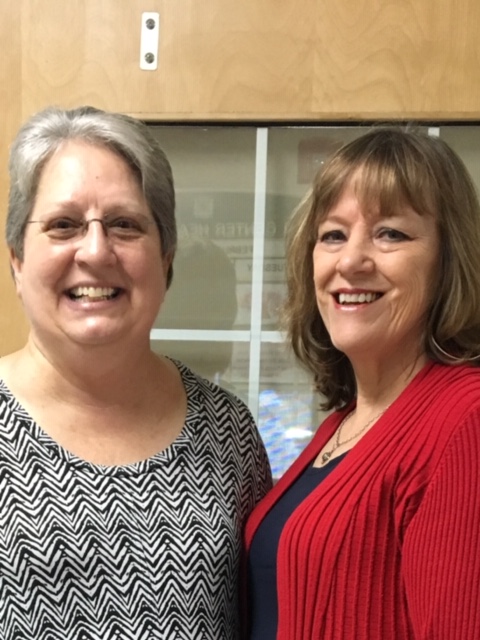 The first week we were managing our ‘different Christmas holiday’ with her family gathering around Johnny’s bedside and mine celebrating at my son’s house, our first Christmas since my husband and I separated last June. (See original post “My Christmas Guest” my Christmas guest). Delores and I sat in front of my gas log fire those evenings and shared our stories, glad to have each other to talk about our non-Hallmark holidays. On Christmas Day, she’d received the gift of Johnny moving from the cancer hospital to a rehab floor–a sign that he was making progress.

After that week, there were nights when Delores returned to my house discouraged, concerned that Johnny’s progress in the new facility was not what they’d hoped for. I was impressed by how she still looked to find something good in each day, no matter how many difficulties they encountered. I could see that her faith in God and the support of the many family and friends praying for Johnny’s recovery, was helping to carry Delores when she must surely feel exhausted.

As we entered January, I talked with her about my plans to join the DivorceCare group on Tuesday nights. I met Delores in ninth grade, and when her father left her mother when we were in 10th grade– they were the only family I knew going through divorce. As I opened up about my struggles with a wide range of emotions going down this unfamiliar path, she was able to relate from what she knew her mother had experienced.

Most nights we’d start talking about the things weighing us down, but the conversation would often end with us finding a lighter side. Delores enjoyed hearing about my days with my grandson, especially now that her grandchildren are older. She also liked hearing about the guys I danced with at the Sunday night Swing dance and Thursday night Texas 2 Step. Sometimes we’d erupt into laughter like we were sixteen again and talking about our dates with those ‘Boone Trail Boys,’ the guys from the community where we often went ‘riding around.’

But one Wednesday night, after we’d finished talking and I’d gone in my room to get ready for bed, I heard her call out to me. When I went back in my living room, Delores was sitting on the sofa sobbing, holding the phone out from her ear. She told me she’d just learned her younger brother had passed away. We sat together in the shocking sadness. I worried for her, the burden of this sudden loss when she was already so worn down. I was glad she hadn’t been alone at home when she received the news.

On January 18th, after working really hard to build muscle strength to meet the requirements to move to community rehab, Johnny was transferred to Brian Center Southpoint, just three miles from my house. Delores told me she didn’t want to extend her stay so long, but by that point we had our routine down as housemates. I could feel some of the stress lifting from her as Johnny improved and she didn’t have to intervene as much with so many hospital staff.

Finally, Delores was able to come and go a little more easily with Johnny’s improvement. Meanwhile, I was settling into my support group and dealing with issues in my individual therapy sessions. As we moved into February, we both felt grateful to be getting past some of the long gray days of January. It was time to go to dinner and celebrate her February 7th birthday. I found a present for her that seemed perfect for this season we’d been going through.

And we know that in all things

God works for the good of those who love Him

Who Have Been Called

According to His Purpose

We agreed that we didn’t know the “Why?” but we did see God’s provision in giving us each other to get through a tough time. Neither of us saw this chapter coming in our lives, but all-knowing God, Alpha and Omega, provided a way for both of us to make it through this dark winter.

Today, on this 29th day of February, Johnny was finally discharged from Brian Center. Before I followed Delores there to see them off, she was all smiles.

“I’m just so excited,” she said as she made her cup of coffee. “The day is finally here!”

We walked outside and the sun was shining on this cold Saturday.

“It’s a beautiful day!” Delores said, loading the final bags of things she’d had in her room in her ‘Durham home’ since December 20th.

When we arrived at Brain Center, Johnny was dressed and ready to go. He looked so much better than when I’d visited him that night in the hospital. 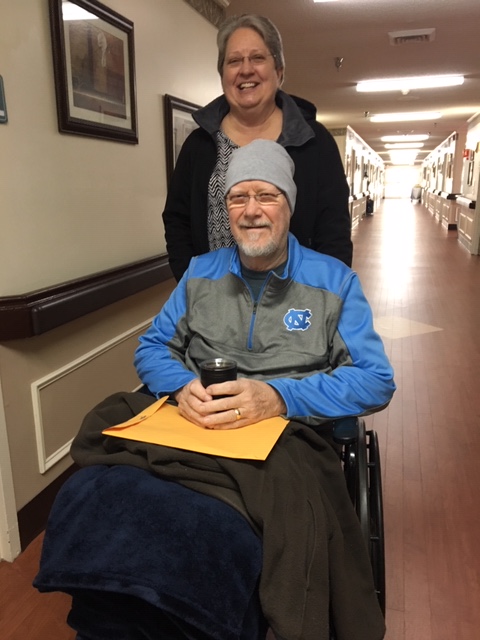 “You’ve really worked hard to get to where you are, Johnny,” I commended him. He’d told Delores he wanted me to see how he’d progressed. “You keep it up when you get home,” I encouraged him, remembering how she feared he may ‘slack off’ without the attentive watch of the PT staff.

He nodded and agreed.

“Let’s go, Delores. I’m ready,” he said, and she pushed his wheelchair, making their way down the halls, speaking to the staff along the way who congratulated him, congratulated them both.

I watched them go out and felt my heart burst with happiness for how far Johnny had come, how faithful and supportive Delores had been, and for how I’d been part of it; We’d all come a long ways since December.

Delores stood by Johnny while he transferred from the wheelchair to riding shotgun. I knew he couldn’t wait to get home to be in the house she’d been preparing for him with the help of family and friends. She said he’d want a big breakfast at his favorite restaurant in the hometown– Landmark. They pulled out of the parking lot, smiling, Delores anticipating the surprise “Welcome Home” she’d planned for her Johnny.

I believed they were heading toward a new chapter; and I was too.

It is a beautiful day. I’m thankful for my Christmas Guest and will remember that light burning all those nights while the grace of God was being provided.

19 thoughts on “Saying Goodbye to My Christmas Guest”