The last time I took Mama to see her brother, we passed a car pulled over by a state trooper, blue lights flashing.  Mama focused on the loaded down Honda with the officer talking to the driver.   “I hope that’s none of our people in that kind of trouble,” she said.  Our people could have been any of a gazillion cousins in Harnett County.

Mama is like her mother, my Grandma Smith, and has always been very close to her large family and their extended family.  When I was planning my pilgrimage to Iona, I researched my grandmother’s maiden name, Gilchrist.  Not only had I found that it meant servant of Christ (see post, Packing Grandma for Pilgrimage), I learned that name was special to Iona.

Iona possesses the remains of five ancient High Crosses.  Only one, St Martin’s Cross that’s stood for over a thousand years, is complete and in its original site.  According to an internet reference on the Gilchrist surname, there was an inscription on that cross that read, “A prayer for Gilchrist who made this cross.”

Last January when I read that, I was amazed and saw it as another sign that I should journey to Iona.  When I was there, I had my picture taken holding Grandma to the cross that could have been made by our ancestor.

She would have been pleased by the craftsmanship of the carving; in the center, the Virgin and Child; on the shaft, several Old Testament scenes; the east face, ornamental with prominent jewel-like bosses.  I assume that if there was an inscription about Gilchrist, it had worn off over the years.  I was disappointed.  In my mind’s eye, I’d seen it clearly carved across the base of the cross, but on close examination, there was no such inscription.

I think about my question of how I would pay tribute to Grandma while I was at Iona.  I remember how she listened and her thoughtful responses.  I hope I did that with my community that week at the Abbey.  One woman that I had some deep conversations with was from Scotland.  She looked like some of Mama’s people—with red hair and fair skin.  She was very friendly and talkative.  I felt like I was at one of Mama’s family reunions, talking with one of her Gilchrist cousins.

During our worship services in the drafty stone chapel, I looked at the windows and thought about all the people who’d journeyed to Iona over the centuries.  Would one of my ancestors have traveled to Iona, set out on a pilgrimage like Grandma wanted to take to the Holy Land?  Probably not, I thought.  They would have likely been crofters or artisans and like Grandma’s farm-girl roots, could’t take time away from the daily chores of life.

Setting out, I didn’t know how I would experience the ‘thin veil’ of Iona, where heaven and earth are close together, a mystical place of pre-Christian fairies and Christian angels.  I didn’t have any mystical experience but rather a strong sense of belonging, of being on the right spiritual path for me in a place that felt like home.

I hope I paid tribute to Grandma by listening to others as she listened to me, that I posed questions in our deep conversations that helped to get at truth.  I believe I took Grandma with me to Iona.  We returned to our homeland and reconnected with ‘some of our people’ on that Scottish isle in a place deeply rooted in faith. 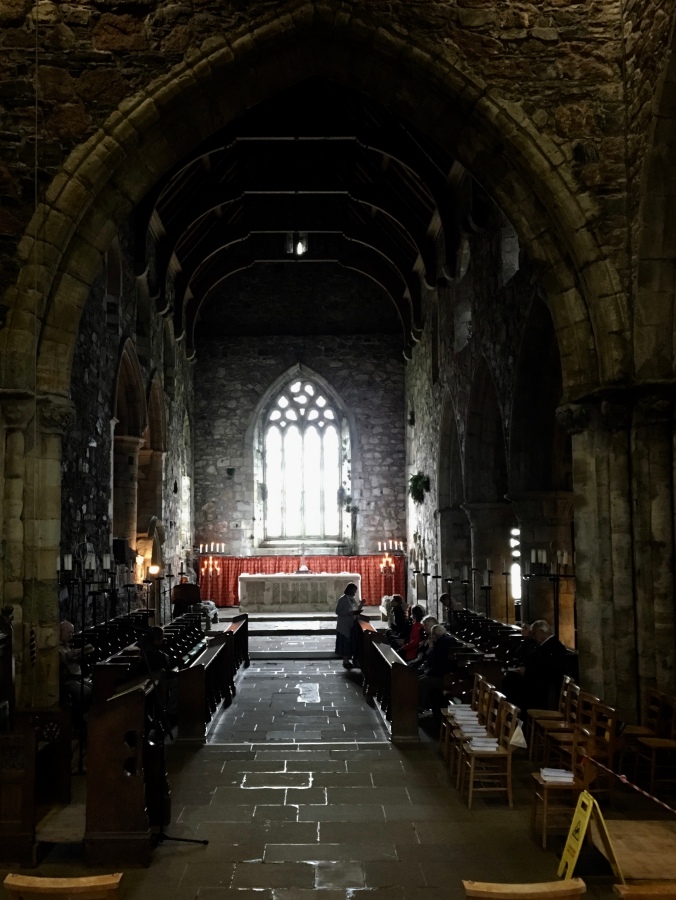 Have you been in a place that felt like you’d arrived home, a place that’s unfamiliar yet very familiar?

In what ways have you seen your ancestors in yourself?

At this point in your life, how would you like to honor your ancestors?

2 thoughts on “Some of Our People”