Last week I stepped across two more rocks in the river of The Gap; the first was moving  to my new home and second was closing on our house. These were exhausting, yet invigorating, accomplishments that were reminders of God’s faithfulness in helping me to move forward on my new solo path.

On the morning of my move, I filled my car with the first load of small items and drove to my apartment. How excited I was to place my clothes in the closets, put glasses in the  cabinets, and decide on the new locations for my artwork. While I waited for the movers, I took a walk around the complex.

I’d first seen the apartments in January. It was a quick look at the model unit and the fitness room and business center. Since it was cold and raining, I didn’t walk around in the common area. But on the hot July day of my move, I was eager to see the pool and other areas I’d missed. While I’d noticed an outside covered sitting area, I hadn’t noticed that nearby was a putting green. Interesting, I thought and returned to my apartment to meet the movers.

That day, and the next few, were exhausting with hours-upon-hours of unloading boxes, cleaning out our house, and loading my car with the last of my possessions. My muscles and joints ached every night, requiring an evening dose of Advil. It had been six years since my last move and I didn’t remember it being quite as taxing. While I’d expected to feel relief that I’d made it to this point, I was so worn down that it was hard for me to appreciate just how far I’d come. I remembered back to another time in my life that I’d felt exhausted from all that had pressed in on me.

It was twenty years ago when I was going through chemo. I shared a couple of weeks ago in my post Happy 20th Cancerversary! how that time was a real learning phase in my life. I remember after the third round of chemo, I was exhausted from the cumulative effect of the cancer-killing agents. When I returned home from that infusion, I laid across my bed and felt weary, opening my Bible to the Psalms, my go-to book. I understood how the Psalmist could change his point of view from God as a Faithful Father to God as Absent Father. When your life is turned upside down, no matter what the cause, it’s hard to keep a constant faith. At those times, we’re reminded that we have feet of clay and our hearts grow weak.

On that day when I was searching for hope during my chemo haze, I came upon the first part of Psalm 86:17 (NIV), “Give me a sign of your goodness.” That spoke to me; I couldn’t even come up with a reminder of God’s goodness.

I was totally dependent on God to give me a morsel of hope along the path where I’d lost my way.

Now, twenty years later with breast cancer behind me, I still find times when I’m weary and can’t find the hope that I need.

After the holiday weekend of moving and cleaning out, it was time to return to work on Monday and then keep my grandson on Tuesday. My energy level was so depleted, I wondered as I unpacked enough boxes to clear a place for him, how was I going to keep up with a two-year-old. I was eager to see him, since he’d been at home with his new brother the week before; I just didn’t know if my body could rise to the challenge. 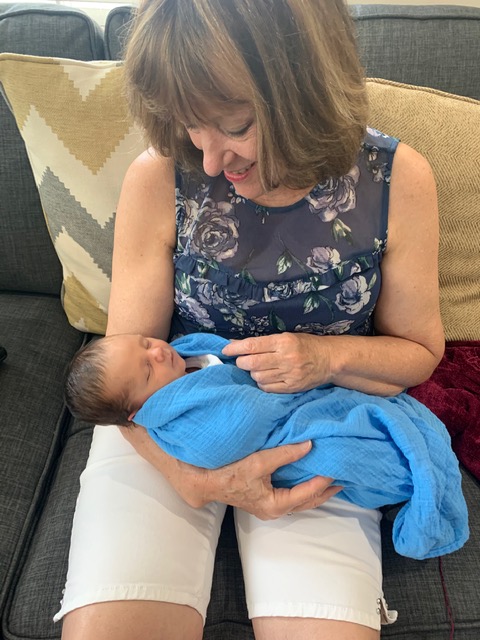 I planned the morning so we’d be outside before it was hot. I told my son to bring Baker’s putter and a couple of golf balls. When they arrived, I met Baker with the wagon and we walked to the putting green. Baker’s familiar with this since his Daddy has a portable putting green in his garage.

Baker told me to hit the balls and then he ran after them and dropped them in the holes. Pretty soon he was running around the green, throwing them and gleefully shouting, “Baker having fun!” Later he said, “Grammy’s new place!” Following behind my exuberant little fellow, I was filled with joy. He transfused his Grammy with some of his energy. 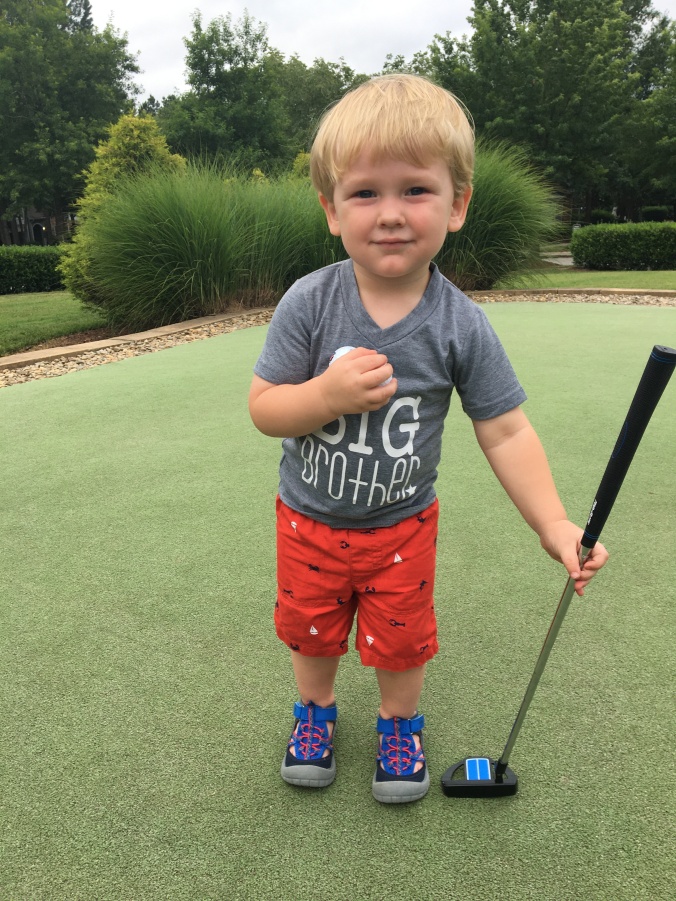 I’d wondered how he’d like “Grammy’s new place” since I wouldn’t have my flower garden with bluebird house, the yard right outside my door, the wide streets for riding in his wagon. But what I hadn’t known, was there would be a putting green. And next to it, I discovered a wide flat area of grass where we could kick the soccer ball, and lots of shaded walkway where I could pull his wagon.

The putting green felt like a “sign of your goodness,” just another assurance that God had provided a new home for me that was perfect. It wasn’t expected, but it was there in my path and delighted Baker. What other things would be in my path? What other ways will God show me his goodness?

The days ahead are a new adventure. There’ll be times when I feel God is a Faithful Father and times when I’ll still feel he’s an Absent Father. That’s my human nature that I share with the Psalmist. And when I’m in the Absent Father mode, I have Psalm 86:17 to remind me to ask God to show me his goodness.

And when I experience God as Faithful Father, may I say with the end of that verse, “for You, Oh Lord, have helped me and comforted me.” 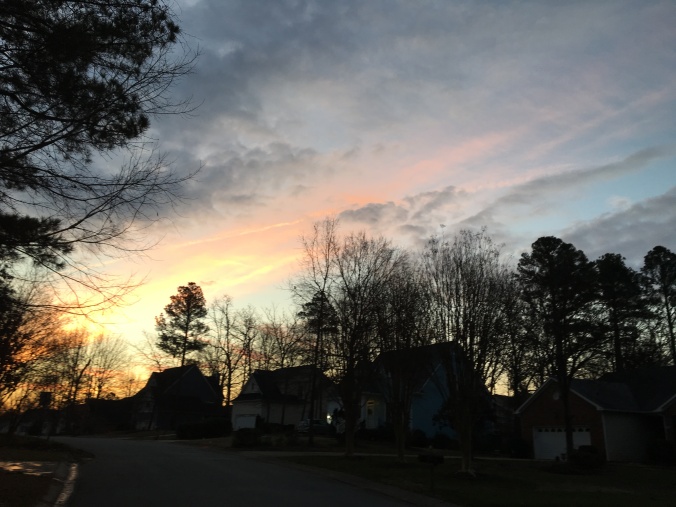 At what times in your life have you needed God to show you signs of his goodness?

What were the morsels of hope that you found in your path?

11 thoughts on “Morsels of Hope on the New Path”