October has been renamed Pinktober— everything colored pink during this month in recognition of Breast Cancer Awareness. I’m always aware of it since nineteen years ago I went through eight months of treatment for triple-negative breast cancer. This year I thought I’d do something different to honor this month: recognize some of the unsung heroes of breast cancer treatment.

There are many professionals and volunteers who make significant contributions every day in research and clinical practice. I’m grateful for their work and its positive impact. Often the faces I see that represent that work are oncologists, researchers, and occasionally, nurses. But the group that I feel have been less noted are Mammography Technicians or “Mammo Techs.” 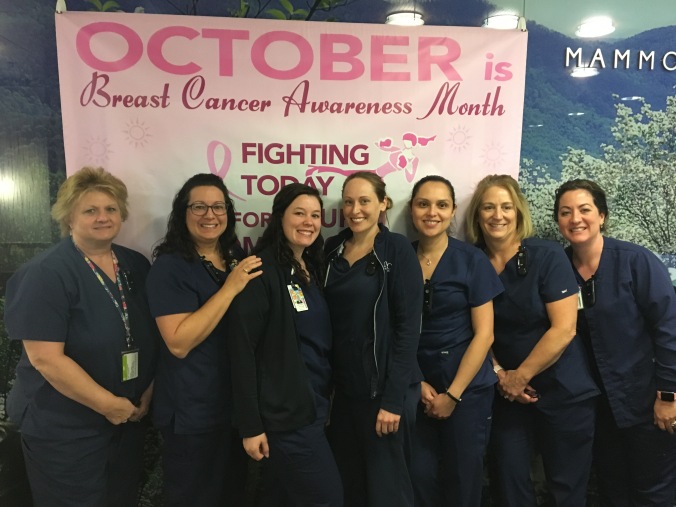 They seem to be hidden in the quiet, windowless, monochrome rooms of the imaging department. I think of what it must be like for them to be facing patients all day long who dread seeing them. When I go for my yearly mammogram, I find that it’s hard to have a friendly chat with the Mammo Tech while she’s checking me in. I’m anticipating the awkward contortions she’s going to have me maneuver into in order to take those pictures.

My breast cancer was found on a routine mammogram. If the technician hadn’t been conscientious that day, she could have missed that tumor since it was deep into the area of my arm pit. She had to work past my discomfort, my complaint of pain or any annoyance that she was ‘taking too long.’ Most of the time, I’m so relieved when they’ve finished all the films that I don’t remember to say thanks.

Last Monday I decided that it was time to honor these quiet heroes– tell them how much I appreciate the work they do. It would be easier in October than in June when I go for my yearly mammogram. I called the University of North Carolina Breast Imaging Center and let them know I’d like to come by with an appreciation gift. I wanted to arrive while a representative member of their staff would be available. At least that way she could give her peers my message.

When I arrived, the receptionist called the manager, Christy, and she came out to greet me.

I’d bought a pink cyclamen filled with blooms and dark green foliage– a plant that I think does well in office light. Along with the plant, I wrote a note in their card that said on the front, “You Are Appreciated.”  It wasn’t a grand gesture, but it was something.

Christy said she’d like for me to come back to the work area where most of the techs were finishing for the day. I’d expected there may be a couple, but not so many on their team. They looked up from their desks and Christy introduced me and said I had something I wanted to tell them.

I looked around into their faces, some with smiles and a bit of surprise.

“I came by to tell you all “Thank You.” Most of the time, when I, as well as others, come in here we’re dreading what we have to go through. And when it’s time to leave, we rush out because we just want to get away and find out from the Radiologist that everything’s okay. We forget to tell you how important your work is, how you skillfully doing your jobs in spite of us complaining of the pain and discomfort is what helps to save our lives. My tumor was in a difficult spot, and if the technician hadn’t been doing her job so carefully that day, I may have had a different outcome. I’m a nineteen-year survivor and want you to have this plant and card as my way of saying “Thanks.” ”

The women thanked me, then Christy asked them to come out to the reception area for a group picture. I got in on the last one before they went back to finish up.

Standing with my Unsung Heroes

“I really appreciate you coming by,” Christy told me. “So many times the feedback I get from people is negative and it helps to have something positive.”

I could only imagine what kind of complaints she received, her staff having to do such sensitive work with patients who were feeling very vulnerable. I was glad that I’d celebrated Pinktober by doing something I’d neglected for a long time. Everyone wants to know that what they do makes a difference; I think maybe that group of Mammo Techs heard that last Monday afternoon.

Is there a group or individual that is an Unsung Hero for you?

How can you recognize that group or person and let them know that what they do makes a difference?

5 thoughts on “Thanking Our Unsung Heroes”