I have always loved horses. When I was a girl, I never understood why we had a hundred-acre farm with cows, pigs, and chickens but never horses. Later, I would come to realize that my overworked father didn’t need the cost or effort of maintaining horses that would never ‘pay their own way.’ Throughout my life, I would love horses at a distance and take advantage of occasional opportunities to ride.

When I planned my solo journey to the Outer Banks, one of the things I most wanted to do was see the wild mustangs that have inhabited that string of barrier islands since the fifteen hundreds. Historians aren’t sure of how they came to live there, but it’s thought that they either were left by Spanish settlers or swam to shore from a ship that wrecked in the treacherous waters. From my Airbnb lodging at Nag’s Head, the best area to find horses was in Corolla, at the northern tip of the Outer Banks. To access the area where those horses hang out you need a 4WD vehicle. I chose to go with a tour company– and I’m glad I did.

We spotted about 15 of the 100 horses in the Corolla area– a good day for horse finding!

Wild Horse Adventure Tours offered two-hour trips to the area. Our guide, Marshall told me the hummer we rode in was the largest kind of hummer in the world. I don’t know if that was true or hype, but I felt secure in that vehicle and lucky to be traveling alone which allowed me to ride shotgun. I was able to talk with Marshall in between his narration and explanation to the others.

Marshall took my picture at the end of our tour

Our hummer was filled with a couple from Germany, a family from Pennsylvania, and another family from North Carolina. It took about twenty minutes traveling beyond the paved road, then through heavy sand to make our way back into the dunes and residential area of a few year-round residents. 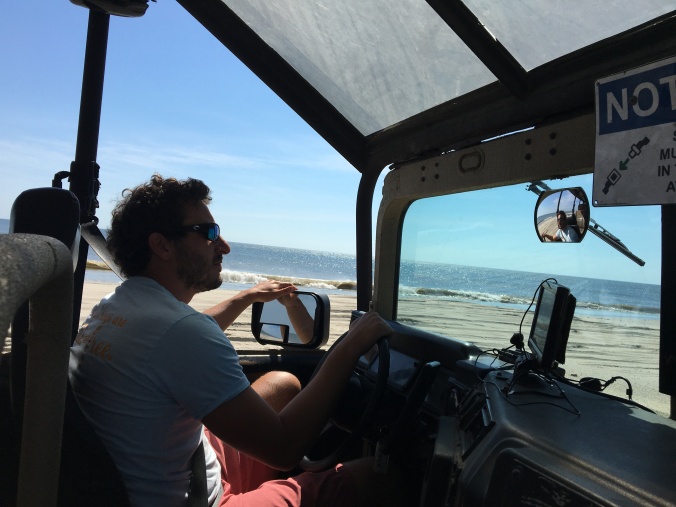 Soon we passed another hummer with Adventure Tours and that driver gave Marshall the latest on where he’d spotted horses. Just like the dolphin tour, these folks worked together to support their business.

When we approached the horses, Marshall pulled out his microphone, “I’ll get as close as I can, but we have to allow them the room they need and we have to keep the vehicle moving. We’re not allowed to stop. Rules of this area.”

He drove slowly and we watched as the stallion, standing in front of his harem, looked across the dunes at a lone mule that had been dropped in that area and had managed to coexist with the horses.

“All the people love the mule,” Marshall said. “That’s why they named him Ramond, you know, like the t.v. show, “Everybody Loves Raymond.” But those stallions don’t.”

We watched to see if there would be any sparring between the stallion and Ramond– but he wasn’t interested and ambled off.  As we drove away, the mother in the Pennsylvania family said, “Go back and stop. I want to get a good picture.”

Marshall looked in his rearview mirror at her and said, “I can’t stop, have to keep moving. Those are rules I have to stick to or our company can be fined– like we were in the past.”

She muttered something and he drove slowly looking for another gathering of horses. When we spotted others in a grassy area, Marshall approached and made a wide circle to keep from disturbing the animals. He’d talked about how important it was for humans to respect the animals’ space and how the highway, and potential development, continued to threaten their existence.

“Ah, come on and get up closer,” the Pennsylvania mother said, loud enough without a microphone. She had her camera ready.

I could see from my side view of Marshall that he’d had about enough of the insistent woman. “Well I guess now you pay my salary,” he said, with a half-laugh that covered his irritation. He drove slowly and got a little closer, but still maintained a respectful distance from the horses. 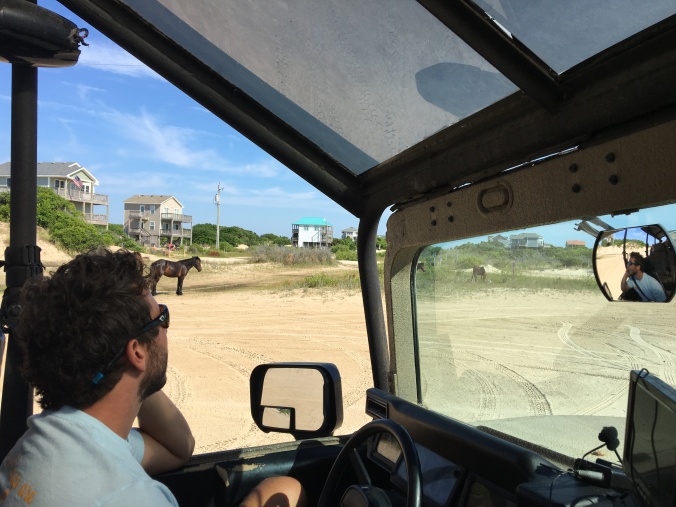 I was thankful that I didn’t have to sit near the Pennsylvania woman. Fortunately, I only had to be on a two-hour tour with her. At least when I travel solo, I’m not stuck in a group with folks you might find irritating. I just had myself to be irritated with for most of the time on my journey!

Marshall told us about the Corolla mustangs that were a hearty, compact breed of horses. He said they were called ‘Banker’ horses because their round bellies, from drinking salty, brackish water made them appear like “wealthy bankers.” Later, I read an article by Donna Campbell Smith, and she said, “The Banker Horse is a tough breed that has survived hurricanes, scorching heat, blood-thirsty insects, and winter storms while living on tough sea grasses and digging in the sand for fresh water.” (Source: Banker Ponies: Wild Horses of the Outer Banks)

On my solo journeys, I start the day asking God to bless me and the people and places in my path. Sometimes, I learn from the creatures in my path– as I had when I went on the dolphin tour the second day of my trip. Besides the enjoyment of this new adventure on a perfect May morning, and my conversation with Marshall, I thought about what those Spanish mustangs had to teach me. What could I learn from watching them?

I saw them as survivors, whether they were left by early settlers or they escaped a shipwreck and swam to shore, they were survivors who’d managed to live on the Outer Banks for almost five-hundred years.

And the way they had survived was to adjust to their circumstances. While the sea grasses may not have been as rich in nutrients as what they would have been fed in a stable, they had lived on it and a combination of the brackish/ freshwater they could find. They had mostly been free to roam in exchange for living with such minimal requirements.

While my view may be simplistic, it feels like something I can carry back from visiting those wild horses that drew me: By adjusting to what is, letting go of what was, I can live  my life in greater freedom. 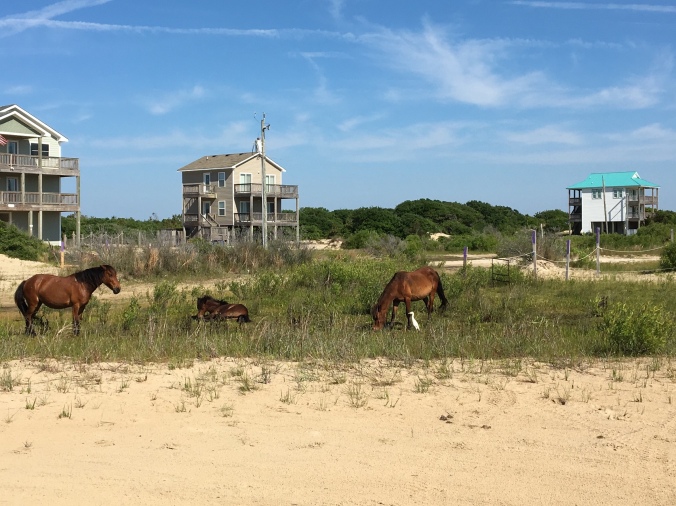 Do you find a message in the life of these mustangs or in some other animal that you’ve observed?

2 thoughts on “Wild Horses Drew Me”