For almost seven years, I’ve traveled to my hometown twice a week to check on my mother at Parkview. When Mama first went there to live, I’d see so many of my high school classmates, all visiting their mothers, that I thought we could almost have a high school reunion in that retirement village. Most visits I’d talk with classmates’ mothers and learn things about their families I’d never known. Now the only one that remains is Pauline.

She is 98 and the mother of Bragg, who was the blond-headed boy in my first grade class. He was my friend, Donna’s boyfriend from first through fourth grade. I’m sure Pauline was one of our Grade Mothers– those women who brought refreshments for our classroom parties, but I’d never met her until Parkview. She had such a sharp memory and I was amazed to learn that she’d been in Daddy’s first grade class. 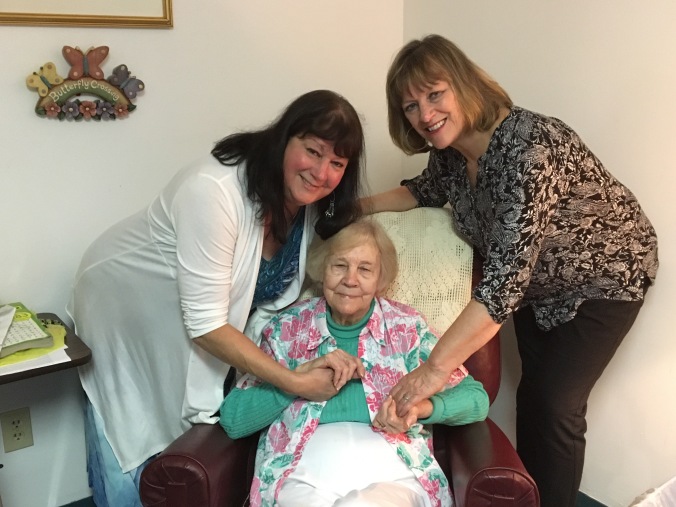 Visiting Pauline with Donna. Both of us in first grade with her son, Bragg

When Mama and I first stopped by her room after dinner, she told me about her memories of Jonesboro school, their first grade classroom.

“I remember he sat not far from me. The teacher had us in alphabetical order because it was easier,” she told me. “Your Daddy was a nice-looking boy and kind of quiet.”

After Pauline said this, she turned to Mama and continued, “You had a handsome husband, Mary, didn’t you?”

Mama looked at Pauline, and didn’t say anything but had a slight smile, which she often does.

Each time when we enter Pauline’s room, she takes Mama’s hands in hers and looks in Mama’s eyes and says, “I’m so glad you came to visit me. You’re my friend, Mary.” Once Pauline commented that it’s hard to be her age and see all your friends die. Recently, one of the women at Parkview who sat at the same dinner table and played Bingo with Pauline, passed away and she told us how much she missed her friend.

Before last May, I saw Bragg on a couple of occasions when he visited his mother. But then things suddenly changed when he was too sick to visit her at Mother’s Day.  Later we learned his lingering sore throat was diagnosed as cancer. How shocked Pauline and everyone was to find out that Bragg, who’d been so healthy, had advanced thyroid cancer and was not doing well, in spite of great efforts at Duke Medical Center. He died in July and my heart broke for Pauline.

Over the months since then, I’ve made a point of strolling Mama in her wheelchair down to Pauline’s room as often as I can. She always says she really enjoys our visits. She tells me stories about what a good boy Bragg was, how he went with her shopping and planted seeds in the garden– all the while by his mother’s side and doing as she’d asked. After the story Pauline looks down at her lap and says, “I just can’t believe he’s gone.”

We sit in the quiet of her room and I hope that I’m bringing comfort to my classmate’s mother– what I can do for him.

Pauline always asks about my family and wants to know the latest news about my grandson. She delights in Baker’s pictures that I show her on my iPhone. She has an amazing ability to remember what’s going on in my life– about how I’ve been working to finish my memoir.

When I told her that it had been published, she said to Mama,  “I know you’re so proud of Connie. She’s a smart daughter.” Mama looked at her and didn’t acknowledge any understanding, but I know that Pauline was speaking for Mama– providing a mother’s praise when Mama couldn’t.

Over the last few months while I’ve been preparing for my Book Launch Reading and Reception, Pauline has been preparing for the auction of her home, including all the contents as well as the buildings and land. She knows it’s best for her financially and recognizes that it will relieve her daughter and son-in-law who have been taking care of it. She’d tell me stories of the workshop behind their house where Bragg and his high school friends would hang out. I knew those boys and could imagine them enjoying their private retreat.

“Are you coming to the auction, Connie? A lot of my friends will be there. Randall said he’s coming,” she asked, referring to Bragg’s best friend, another one of our first grade classmates.

“I’d like to. It would be nice to see where Bragg grew up and that yard that you spent so many hours working in, Pauline.” I told her, and thought about how she’d mowed the grass up into her eighties and tenderly cared for her flowers.

Every time I’d visit with her she’d say how many weeks were left, counting down to the auction just as I was the Book Launch that was the preceding Saturday. I’d ask her how she was doing with selling her home she’d built and spent so many years in, the place she’d raised her children. She had that quiet resolve, that pragmatism of her generation who’d lived through the Great Depression and WWII. She had saved some special things and would keep them in ‘her room’ at her daughters house. “It’s time,” she responded.

On the Saturday of the auction, the sides of the road were lined with cars in front of Pauline’s house, that was blocked from view by two large white tents. Pauline was sitting on the first row in front of the auctioneer. I sat down beside her.

“Looks like it’s well organized, Pauline. And there’s so many people here,” I commented.

“Yeah, I hope we make a good profit. My daughter and son-in-law have worked so hard. It’ll be a relief to have it behind us.”

The sale started.  The fast-talking auctioneer used his rhythmic monotone to lull the crowd into holding up their cards and bidding before it was too late. There was a lifetime of items from kitchenware to gardening tools to homemade lamps. Every time the auctioneer came to a unique item he’d ask Pauline about its origin. She’d tell him how her husband made it or something about its history. There were tables full of dishes and I scanned them for the one thing I wanted: a piece of her Iris and Herringbone Depression Glass.

Pauline had told me that her husband knew she liked that pattern in the clear glass, and he made a point of giving her pieces as gifts over the years. That molded glassware was popular from the late 20s to the early 1940s. It was a cheerful pattern with the form of the iris and the vertical herringbone. I’ve always loved pretty dishes and to have a piece that reminded me of Pauline and Bragg would mean a lot. I wanted her to know that someone would continue to cherish her dishes.

I left the tented area to see their home, the workshop, and the yard– the setting of Pauline’s stories. My friend, Donna, had joined me and while I was away she watched for the Depression glass pieces to come onto the auction block.

I walked through their house and thought about all the family memories within those walls. Going through the living room, I imagined Bragg in first grade, coming in early Christmas morning to find his gifts from Santa. I looked through her kitchen window and in my mind’s eye, saw Pauline standing there and gazing out over her front lawn as she did the morning dishes. Now, peering out the window, I witnessed the auctioning of artifacts of the Cox family.

Out back, I explored Pauline’s husband’s workshop that had doubled as Bragg’s hang out with his friends. I could see all that gang that had been in my high school class, boys that were smart and nice and destined to be engineers.

Later, Donna would give me the Iris and Herringbone ruffled berry bowl and small serving dishes she’d bid on for me. At my next visit to Parkview, I took them to show Pauline.

“Look what I got at the auction,” I told her, pulling out the berry bowl from my bag.

“Oh, I’m so glad you got that, Connie. I used to serve my canned peaches in that bowl. Bragg really loved them.”

“Well, these will always have a special place in my home. I see why you liked that design.”

I took her picture and she told me how she appreciated me coming to the auction. 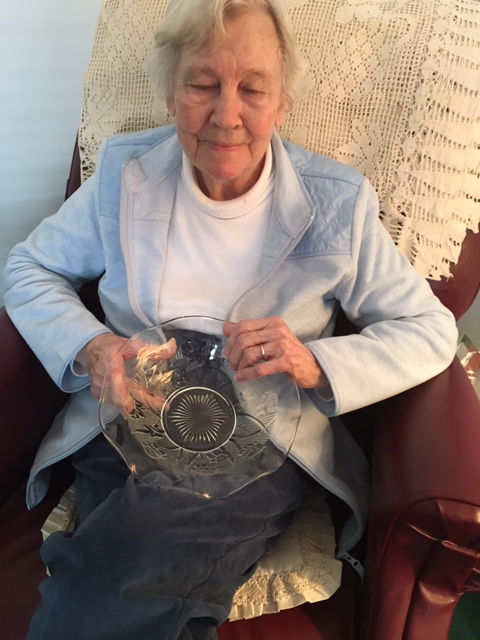 And I was glad I had. Now when she tells me about Bragg as a child, I can see that garden where they sewed seeds and the kitchen where they sat at the oak table for their family meals.

How I’ve been blessed by those visits with Pauline.

Who are the people in your path who you’ve made unexpected friendships with that are like hidden treasures?

What have been the mutual benefits of those relationships?

11 thoughts on “People in Our Path: Visits with Pauline”