Last Saturday I walked in the Kay Yow Cancer Fund Run/Walk with women who are survivors of cancer along with their supporters. Most of us were strangers that came together for a common cause through a shared life experience. I carpooled to the event with Mary, the leader of our Write to Heal group through Waverly Hematology and Oncology, the practice where I received chemotherapy and have had follow-up care for the last eighteen years. My oncologist, who is the head of that practice, Dr. Mark Graham also treated Kay Yow for breast cancer. She was the beloved women’s basketball coach at North Carolina State University (NCSU). Now the community unites behind the foundation that she started to fund women’s cancer research.

It was a nasty, cold and wet day but spirits were bright in the Talley Student Union of NCSU with participants wearing bright t-shirts and carrying banners and balloons with team names. I hadn’t been in that student center since my older son went to freshman orientation in July of 2004, four years after I was treated for triple-negative breast cancer.

A sportscaster from the Raleigh television station WRAL, Jeff Gravely, was the emcee and recognized the groups and their fundraising totals. The first-place winner was Young Moms Against Cancer. They raised an amazing 44K dollars. What was most touching was seeing those moms walk onto the stage with their small children, husbands, and other supporters.

I found tears streaming down my face, watching those mothers who had surely put on their ‘Brave Mommy Face’ in order to go through treatment while maintaining daily life. I remembered back to getting my cancer news and how important it was for me to live and raise my two sons.

Later, I told my daughter-in-law, Emily ,who is now a Nurse Navigator at UNC Breast Cancer Center, about the Young Moms. I told her the amount of money they’d raised and how touching it was to see them on stage. She looked at me and said, “It was like that for you.”

I was taken back by her response. I didn’t see my situation as like those Young Moms.

“But their children are a lot younger than my boys were,” I countered, since my sons were fourteen and fifteen, going into 9thand 10thgrades. While I had to put on my brave face, at least my boys could understand why their mom had to lay on the couch instead of cook dinner. The children of those Young Moms were too young to understand. They had many more years in front of them of needing a mother’s care.

At the walk, we all filled out signs that said, “I run/walk for ____” and wrote a name in the blank. A virtual friend on Twitter, Abigail, who has Stage IV metastatic breast cancer, came to mind. Her picture with her two young sons touches my heart. She is like those Young Moms Against Cancer and I would dedicate my walk to her.

We held our signs high for a group photo and then we marched onto the  2.5 mile course around campus. The rain held off as we left Talley Center to the NCSU Pep Band playing their fight song. I walked beside Mary and Sandy, a woman we met coming in from the parking garage, a ‘stranger’ in our path who was also treated at Waverly. She shared her story of getting her diagnosis just four years prior. She needed to tell her story, that still registered her surprise with her diagnosis. Several times she told us, “I didn’t think I’d have breast cancer because I have no family history of it.”

How important it is to tell your story, to work through the details until you have taken in that reality and come to your own terms with it.

After Sandy told us about her cancer experience, she moved on to talking about her life now, the joy of her first grandchild. We soon learned that we were both first-time grandmothers and our grandsons were born just four days apart.

Maybe because I’m a Southerner, I’m always curious about ‘where you’re from.’ It seems that gives me a context for remembering the people in my path. Sandy said she was from upstate New York. Mary told her that she wanted to visit that area and go to the Thousand Islands in the St Lawrence River that shares borders with the US and Canada. I told them I’d taken a boat tour of that fascinating area of over 1800 islands.

“I went there on my solo journey to Cape Vincent. Wanted to see that part of New York since my only experience of the state was from visiting my younger son in Manhattan.”

The wind picked up and the chill from the rain made us walk faster. Like all basic conversations, we ended up talking about the weather and comparing what Sandy had known living in a small town in western New York before moving to the South.

“Now I have a harder time with the cold,” she said, and pulled her hood over her head.

I mentioned how I’d worked with a PE teacher at my middle school who was a hockey player from Buffalo and he’d been glad to escape their tough winters. I’d flown in-and-out of the Buffalo airport on my trip and had visited the Lockport locks and took an Erie Canal cruise, wanting to see the place that we sang about in elementary school.

“That’s where I’m from,” Sandy said with a smile.

Funny how our conversation had wound about and came to Sandy’s hometown and my solo journey and a place that Mary was considering for her first solo journey.

We passed a mobile mammography unit that had a picture of Coach Yow. I stopped to take a photo. I thought it captured her spirit–both in her smile and her words.

There were many things we could have done last Saturday instead of walking in that event. But it was important that we come together as a community, a sisterhood, and show our support for the work of Coach Yow, and to honor her bright spirit.

The path we walked together was filled with hope because we were not alone, we supported one another and those women who before the walk were strangers and now were friends. 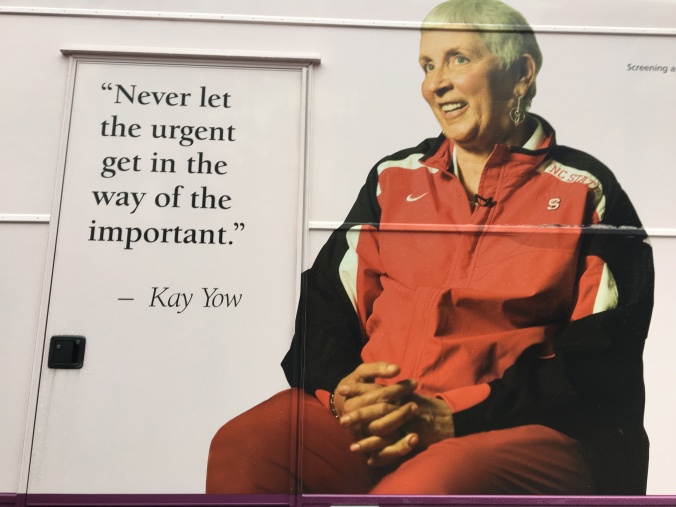 Has there been a ‘sisterhood’ or ‘brotherhood’ community of support in your life?

How do you feel supported when you’re in that group?  How have those ‘strangers in your path’ become friends with a shared experience that brings you together?

8 thoughts on “People in Our Path: Sisterhood of Survivors”