Ten years ago, I gave myself a birthday gift of attending a writing conference in Greensboro—about forty minutes from my home. I didn’t know anyone going to the conference and decided to approach it like my solo journeys—praying that God would bless me and the people in my path, trusting that things would unfold as they should.

I arrived late, and had to sit at the back of the meeting room of the hotel. I don’t remember what that particular session was about, just that the focus of the conference was finding faith-based publications for our writing. I hadn’t published any of my creative non-fiction at that point, so it seemed to be the right next-step for me. They closed that session with a Q and A and I remember that a woman who sat at the front table seemed to have a lot to say.

Later, when we took our lunch break, they instructed us, “Sit anywhere.”

There were tables for four and I planted myself at one and was joined by a mother and her eighteen-year-old daughter. The woman who’d sat at the front of the room and was so vocal in that Q and A, joined us. Her name was Erika.

We talked about where we were from and what we were writing. While Erika was originally from New Jersey, she had moved to North Carolina to attend Duke University, then later, she and her husband settled in the area.

No wonder she sounded forceful, I thought. She’s a Northerner, from New Jersey and had gone to Duke. As a native North Carolinian, a graduate of UNC, our most fierce rivalry is with Duke, especially in basketball. 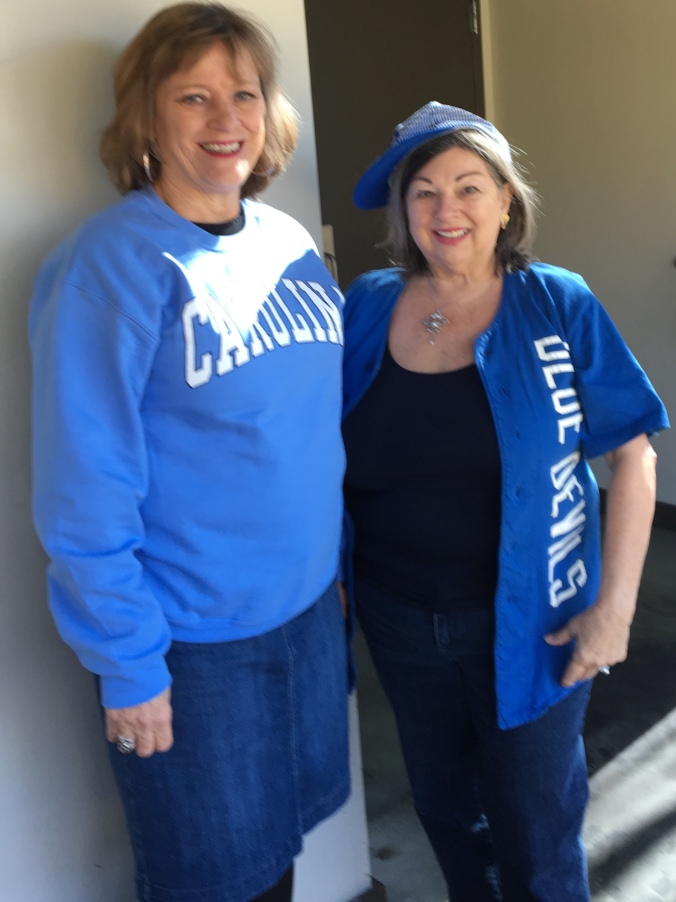 At lunch last week with Erika

While eating together, Erika seemed more relaxed, smiling and laughing easily. The mother and daughter finished and left to join some folks they knew. Erika and I became engrossed in conversation. I learned that she lived within eight miles of me and had grown children who were close in age to mine. She’d been caring for her father with dementia while I was doing the same for my mother. Erika talked about how her father coming to live with her had changed things.

“Now, since I have to be home with Dad, I’ve found time to write. I can easily pen my essays and take care of him.”

She’d taught English for years and had that spirit of a teacher, wanting to help the curious student, offering suggestions for places I could publish my essays. Sometimes other writers can be competitive and don’t share publishing sites, but Erika freely told me the places she’d been published and encouraged me to send them my work.

When we left that day, we exchanged emails and made plans to meet for coffee. Our cars were parked across from each other. The political sticker on the back of her Cadillac was as polar opposite to the one on my Camry as our universities!

Since that meeting at the conference, we’ve had many afternoons of coffee at Starbucks and lunches at local restaurants, sharing about writing, and lately, our new roles as grandmothers. We’ve attended several writing conferences together. Erika’s been supportive of my memoir and I’ve supported her writings.

She’s been very prolific in publishing her essays in anthologies such as Chicken Soup for the Soul and regional magazines like Sasee of Myrtle Beach. Her advice on writing humor has been published in The Writer, and her essays on craft published in the online Funds for Writers Magazine and the Writers Digest website. She’s used her talent for teaching with her adult education course for Olli at Duke University on composing the personal essay. These are just some of her accomplishments and now she’s getting ready to publish her mystery. She’s generously given to me over the years and now I want you to know my friend and fellow author:

Erika Hoffman’s mystery, Why Mama will be published by Library Press Partners of Wake Forest University this April.

Why Mama emits a gothic southern, nostalgic aura.  The story revolves around Fancy, a fifteen- year- old figuring out who killed her parents in 1974.  Three narrators tell the mystery.  One is Fancy, an upper -class teen who becomes orphaned on a summer day with gusting hurricane winds. Forced to live with her 19 -year- old sister Eve and sis’s lecherous husband in a duplex way off the wrong side of the tracks, Fancy begins her quest.  The mission is clear: to discover the identity of her parents’ killers despite the sheriff’s ruling it was a murder/suicide and despite doubts expressed by many townsfolks regarding her sanity. People, Fancy assumes, are allies betray her. Others, viewed as enemies, help. Another narrator is her sister Eve, whose judgment isn’t sound and who’s subject to panic attacks. Fancy’s best friend Judy is the most objective reporter of the murder and ensuing action.  During it all, Fancy follows leads provided by an albino doe whose soulful eyes remind her of her mother and make the teen question the idea of reincarnation. Because of her mother’s strong Christian faith, Fancy believes her mother could never have committed the crimes she’s accused of. Fancy has many questions she’d like to ask her deceased mama, but the main question is: “Why? Why did this happen to us?”

(Watch for Why Mama on Amazon and wherever you purchase books)

You never know who you’ll meet in your path or how they’ll impact your life.

I didn’t have any idea that the greatest thing I’d walk away with from that conference was meeting Erika, my mentor and friend.

Now, all these years later, we’re still unlikely friends who’ve navigated our relationship around university and political party affiliations, and the regional differences of our backgrounds. Instead, we’ve focused on the things we share, building our friendship one conversation at the time, one writing success at the time–as we cheer each other on.

Have you had a chance meeting with someone in your path that turned into a long-term friendship?

What ways have you shared support of each other’s dreams over the years of your friendship?

4 thoughts on “The People in our Path: Unlikely Friends”