I followed the blue heron along the shoreline of Coquina Beach, amazed that the large bird would allow me to trail so close behind.  I’d seen many of them flying over Jordan Lake in central North Carolina during my years of living in that area, but never had I walked within feet of one.  He or she, I didn’t know which, appeared to be searching for something, probably scanning the shallow water for food.  It occurred to me when the bird stopped from his roving and turned his head to the left, he appeared like a question mark.

It reminded me of how I approach my pilgrimages as if they’re a moving question mark, taking off on my journey and asking God, “What is it you’re going to show me this time?”

There have been times that I’ve been tempted to see the travel to-and-from my destination as not part of the journey.  But this time, given my long drive to my cousin’s on the Gulf Coast of Florida, I rethought that and saw that God can work in my life just as much on the drive as when I’m finally there.  The benefit of a road trip is there’s time for the transition from my everyday life at home to that space I’ll inhabit while I’m on my pilgrimage.

The first miles going south on I-95 were spent letting go of things undone and unresolved at home– like writing projects, my part-time job as a research nurse, and household responsibilities.  Sometimes my anxiety wants me to be sure everything is nicely settled before I leave.  During my previous 14 journeys, I’d found that same tendency which may be due in part to my internal resistance to leaving the safety of home, crossing the threshold to the unknown.  I tried to settle the issue by praying to let go of that latent worry.  I needed to rest in knowing I’m competent to handle whatever awaits me when I return.

After a couple of hours of driving, I started my radio-station-surfing since I didn’t have pre-programmed music.  I landed on an affiliate for K-Love, a Christian radio network.  The segment was on making a ‘stop-doing’ list as a way to counter our extensive to-do lists and our overly-busy, media-absorbed habits that keep us from being present with people who are important to us.

I threw out the question, “What do I need to stop doing, God?”

I drove on, waiting for something to come to the surface. In my quiet car, traversing the flat farmland of South Carolina, I was reminded that in working as a Life Coach, we often ask people to sit and wait for an answer.  It’s good for my journey to start with a question to go before me during the week.

The first answer I received was, You need time for quiet. 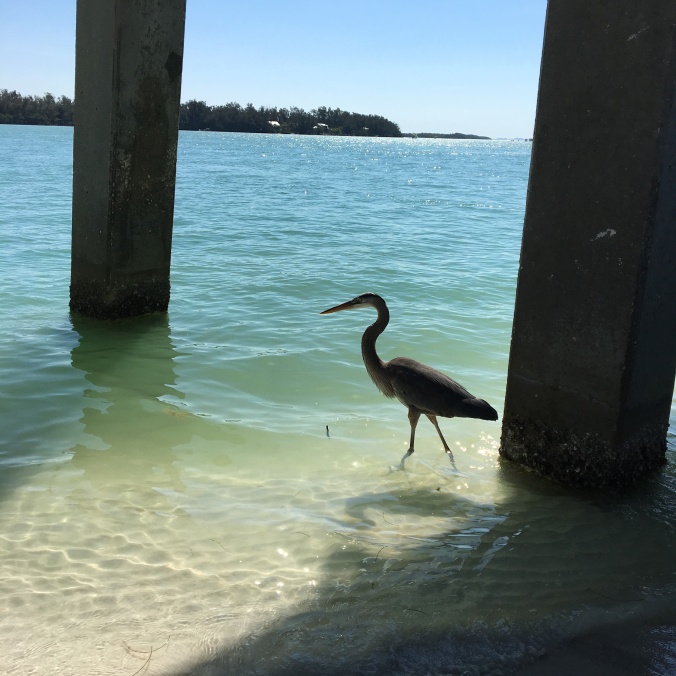 Specifically, the Podcasts icon came to mind and my emerging habit of binge listening to programs.  While stimulating and educational, they kept my mind buzzing and made it hard to settle down and be still.  Like other things, I needed to be more moderate and put limits on anything that takes up mental space, valuable attention, and ultimately zaps my energy.

The list to stop-doing continued on my drive and throughout the days of my journey.  It grew to include stop worrying, stop hanging on to items that clutter my life as well as my house, and to stop losing things that send me into a panic.

But before my stop-doing lists became too long, and a burden of too many things to remember, I realized that it can be a traveling question that stays with me beyond my Florida pilgrimage.

Like the blue heron along the shore, I can fly away and pick up the search in another place, carefully watching to see what floats up for me.

What is your moving question?

How can you be open to the answers that surface?