Today I’ve been thinking about my solo journey five years ago to Michigan. The place I’d looked forward to visiting the most was Sleeping Bear Dunes National Lakeshore. All the photos I’d seen of Lake Michigan from the vantage point of the dunes, showed a vast expanse of tropical-like water with varying hues of blue-green. It was hard for me with my Southern perspective to believe any northern shore could look like that; I wanted to see it for myself.

That trip was in July in the peak of the summer vacation season. It may seem odd that as we’re gearing up for the transition from fall to winter, from Halloween to Thanksgiving with Christmas decorations in all the stores, I’m remembering summer in Michigan. But it was how things happened at Sleeping Bear Dunes that reminds me of this current season, of trying to find my way in this new territory since my separation.

I’d planned my Michigan route to end with a visit to the dunes. Arriving in Traverse City on Sunday by lunchtime, I would eat at the Grand Traverse Pie Company and have a final slice of pie made with those tart Michigan cherries. I’d check into my hotel then drive the forty-five minutes through the country side to the dunes. The weather turned cool and a light rain fell. When I arrived I was surprised there weren’t more cars in the parking lot. I anxiously walked to the lookout, anticipating my first view of that blue-green expanse that had been in my mind. 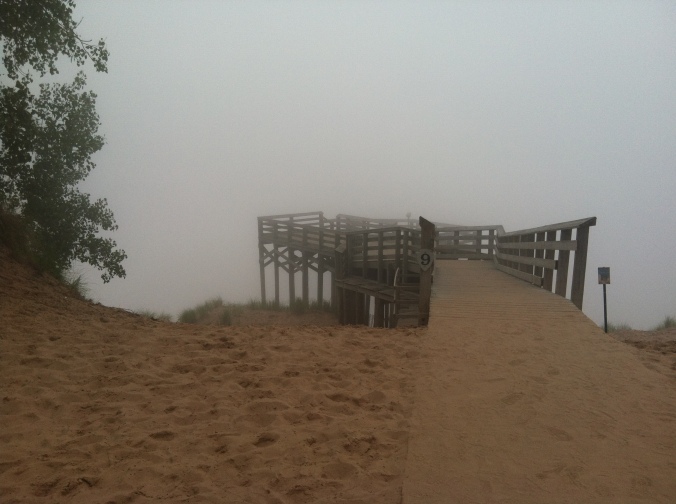 But when I reached the observation platform, I could see ahead only about ten feet because the entire place was covered in thick fog. I stood in disbelief, listening to the water lapping up on the shore below but unable to see the waves. 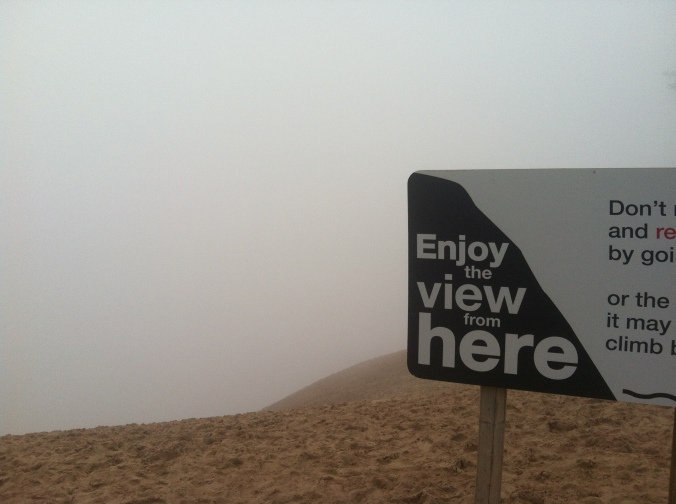 How could I have been so foolish to not look ahead at the forecast? No wonder there were so few cars; other tourists had altered their plans.

I felt sick with disappointment, wanting this to be the crowning memory of my nine-hundred mile road trip. What am I going to do, I thought and walked the trail along the top of the dunes.

Settle down, advised that still small voice of God within me.  Just wait a while and you’ll figure out what to do.

I stood in a grove of trees that appeared dreamlike, shrouded in white.

After a while, seeing no change, I drove back to the visitor center. The ranger said the front that had moved in wasn’t expected, a combination of weather factors that were infrequent in July.

“Could be better by tomorrow,”  he said, and gave me the phone number for the park weather information.

Feeling a bit tired and beaten down by my failed attempt, I returned to my hotel in Traverse City. I’d planned to leave from there the next morning but I’d have to go later from the dunes. It would change how far I could travel that day and put more pressure on the next when I’d be pushing to return the rental car. I had to do that; I couldn’t go without trying once more to see Lake Michigan as I’d imagined.

I realized I was tired from more than just the disappointment. Weeks before my trip, we’d moved and the intensity of selling one house and buying another, of downsizing with months of cleaning and clearing out had worn me down. I was glad the hotel was nicer than others I’d stayed in on my journeys. It would provide a comfortable place to relax that evening.

That’s the part that reminds me of now. This time in my life has been intense with the ending of one way of life, being in this gap of change, and trying to catch hopeful glimpses of my future. In my last therapy session, I told my therapist that I’d worn myself out the previous week by doing too much; added to my busy daytime schedule, I’d gone out for three nights of dancing to counter my surging sadness. I was exhausted at the beginning of the next week when I shared this with my therapist.

“You’re just trying to figure things out,” he responded, and we discussed how I’d find what worked for me, how to balance time with others and time alone.

Back on that July evening in my Traverse City room, I watched television, talked with my family at a leisurely pace, and ate a delicious dinner in the hotel bistro. I walked at the marina during sunset and phoned the weather line repeatedly to check the forecast. I had a great night’s sleep in a very comfortable bed with luxurious linens.

The next morning, I headed out early for Sleeping Bear Dunes. There wasn’t a cloud in sight and I felt my anticipation build, maybe even more than the day before. I could see the observation tower long before I reached it. Holding my breath, I walked up to the rail.

“Oh, my goodness!” I said, and let out my breath, overwhelmed by the vast expanse of blue-green water that had been barred from my sight the day before. This is even more spectacular than I imagined. Because I had not reached it easily, I appreciated the view even more. It was worth all that it took to reach that vantage point.

Now, as I think about this journey that I’m on, I’m grateful for the time in Traverse City that was an unintended boon of that pilgrimage. I’m staying in this evening instead of going to a dance choosing to do the quiet things that I want and need to do. Going forward, I’ll keep asking myself what I need, learning to navigate the choices that work for me.

And I hope that one day, I’ll reach that observation deck and see a beautiful new expanse that had been barred from my sight. 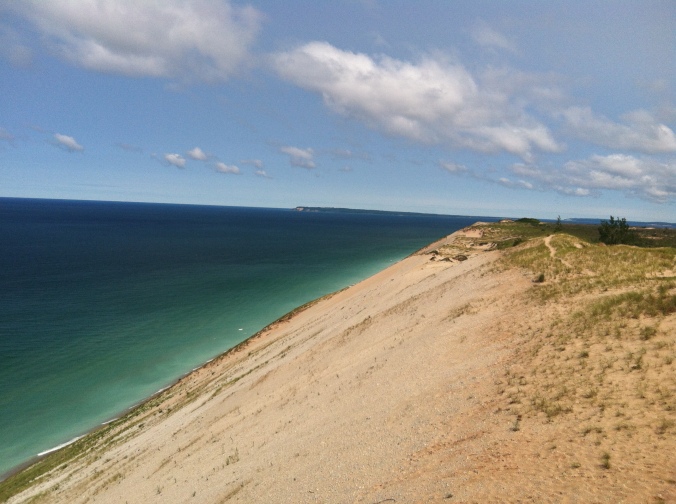 What obstacles have you encountered that barred your view of your goal?

How did you react to the situation? What did you learn from that situation and did it serve you at some later point in your life?

8 thoughts on “Waiting for the View”